“You never get a second chance to make a first impression.”  – Mahatma Gandi

This is certainly true when it comes to comic covers. This is the first time you get a chance to WOW your fans and passerby’s. I feel like none of the covers so far have really had a huge impact on the reader. That is until now

So for those of you that have asked or are digging the process updates, here is a comprehensive documentation of how this new cover came to be.

It’s no secret that we are big Alan Moore fans. Issues 6-10 are patterned after the second Swamp Thing arc, the run with all of the gothic horror. Moores take on the vampires is still nightmare worthy but the actual inspiration goes back much further adn like some episodes in life, connects in mysterious manners.

Moore is referencing the vampires from Saga of Swamp Thing from the 80’s. These were re- released to coincide with the Wes Craven movie about the character. I had this issue growing up and was always influenced by Yeates composition. Thinking about it now, there is also the little girl, Casey, who is Swamp Things ward. This obligation to protection shows up in our stories in issue 1 and 4. I even sketched this out not too long ago to submit to Covered but lost interest at some point. Needless to say, this image has immediate influence on our composition.

Fast forward a few years and I somehow got a couple of issues of Moore’s run before I even knew who he was, I was probably around 10. WAY  too young to have Moore’s creatures giving me night terrors. 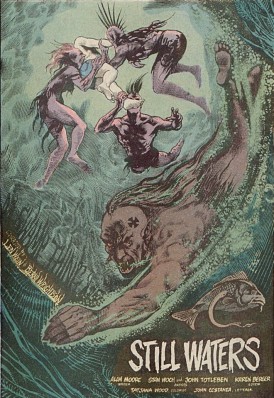 I still have trouble reading this part, this is the sequence that terrified me as a child

So Moore being the genius that he is actually referenced characters from a previous regime and made them way more creepy and relevant. And it was the same punk style vampires that I was so receptive to years earlier. Our vampires are hopefully as memorable as his.

Here are a couple of the initial sketches. Yes, I have to do a ton of thumbs sometimes to get the LOA right. 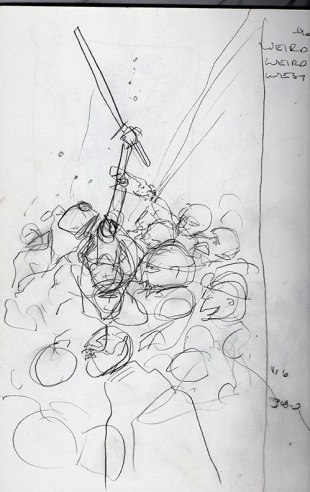 Once the idea was solid I drafted up a more confident graphite version:

Once the idea is there, I printed off a low opacity version and tweaked the vampires some.

After the inks set, it was a matter of scanning, halftone and laying in type.

There is also a reference to A Girl Walks Home Alone at Night in the lead vamp but that’s for another post.

Thanks for stopping by and keep the comments coming. We might not publish all of your notes but we will certainly try.